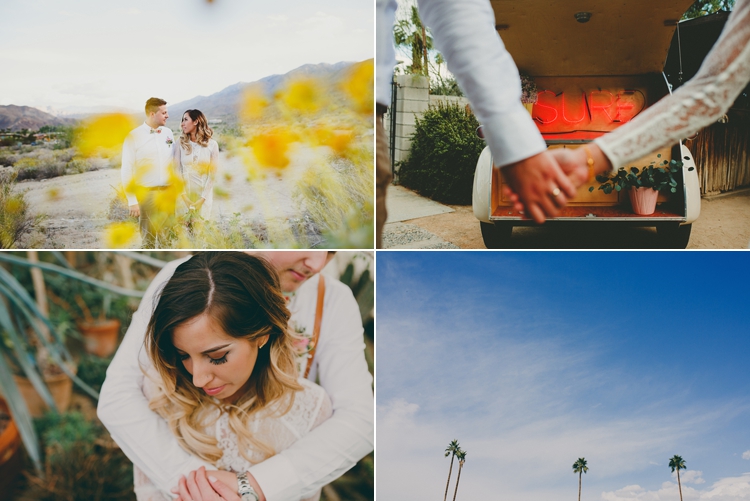 I have photographed weddings at Ace Hotel, Airbnbs, private elopements in the Palm Springs desert and even captured destination weddings at the top of the Palms Springs tram. All of the locations were freaking awesome, but the people were even better. The point I am trying to make is that Palm Springs has a ton of different and unique venues or backdrops for any bride and groom considering a desert wedding. Whether a couple wants a simple ceremony in the desert with wind mills as the only guests or something more fancy like a classic wedding at the Avalon Hotel, Palm Springs has got it covered. However, there is one location in Palm Springs I have passed by more times than I can count and always wanted to check out but for some reason it would always be closed or they would have an event going on there. That spot was Moorten Botanical Garden which is located about half a mile behind Ace Hotel. The spot is a little secluded and you could easily miss it if you were not paying attention (this is one of the many reasons you shouldn’t text and drive), but I did not have to worry about passing it on this weekday because Moorten Botanical Garden was going to be the setting for Noelle and Darryl’s Palm Springs wedding. Well I mean I guess I could have still missed it but that would have made me a complete idiot, but any navigational struggles now I solely blame on Google Maps.

Noelle is from Laguna Beach and Darryl from the United Kingdom. That means England for those of you who did not make it further than 8th grade. Just think the bad guys in Braveheart who Mel Gibson was fighting, but know they are much nicer now. Darryl crossed the pond to study aquatic animal psychology which meant he would spend hours at the beach trying to learn the behaviors of dolphins and other sea life. It was during one of his sessions he met Noelle who was playing volleyball with a bunch Canadian dudes. Darryl quickly realized that if he wanted a chance with Noelle that he would have to make a big move so he took off his shirt and asked to play with the Canadian dudes. The scene was very much like that of the volley ball scene in Top Gun (CLICK HERE and jump to 21 seconds in). Darryl dominated the match and stole Noelle’s heart with his well-timed aces, leaving the Canadian dudes in the dust with their hockey talk and universal health coverage. Fast forward a few years later and Noelle and Darryl are engaged. They decided to get married at Moorten Botanical Garden and get ready at Ace Hotel beforehand. Below are some of the Palm Springs wedding photographs from that day.

This Palm Springs wedding at Moorten’s Botanical Gardens was very intimate and therefore I really enjoyed the entire relaxed feel of the day. We never felt rushed, had plenty of time to move from location-to-location and generally had an awesome time from start to finish. I really wish more brides and grooms would take the relaxed approach and go with a smaller wedding. The vibe is totally different and it makes for so many more authentic moments.

Wedding Coverage: One photographer for 6 hours