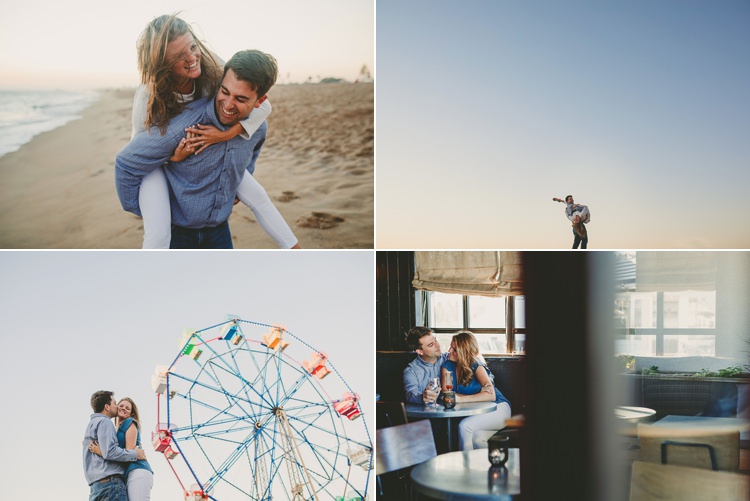 About 6 months ago I was driving up north for an engagement session at Victoria Beach in Laguna so I called my friend who lives in the area and asked if he wanted to go out for pizza + beers after my photoshoot. He had to pass because he was actually en route to Los Angeles for a Empire of the Sun show, but said he had a spare ticket if I wanted to roll out after my engagement session. I said, “fuck yeah” and after the engagement shoot partied all night in Los Angeles. Now you might be asking yourself what the hell any of that has to do with this blog post about a engagement session in Newport Beach and the answer is simple: it was in Los Angeles where I first met Randi (the bride to be).

So I meet Randi in Los Angeles and she’s telling me about how she is planning a wedding in Temecula, which happens to be a location I frequently shoot at. In fact, Randi mentions how she’s getting married at Galway Downs Equestrian Park, a wedding venue I recently photographed. After talking about dates we learn that the only date I had available for the entire month of October happens to be her wedding date. Boom! After working out the details we were all set for the engagement photo shoot with Randi and Drew and wedding later this year in Temecula. This part of the story is their engagement shoot, but I will let you look at some photos first since I’ve been blabbering on and on for some time and you are probably sick of the non-sense. So ignore me now and check out some of the engagement photos in Newport Beach with Randi and Drew!

Okay so I gave a little background story on how Randi and I met, but let me share a little info about the engagement session in Newport Beach to bring this baby full circle! The engagement session started at one of my all-time favorite places: a bar. There is something about conversation over drinks before shooting that really helps set the tone for the day and naturally we utilized that time efficiently! After a couple cold ones we cruised around Newport Beach where security guards asked me if I had a permit to shoot in that location. I emphatically and confidentially exclaimed I was a international wedding photographer who shot Brad Pitt’s first wedding to that “chick on Friends”, and was insulted  such words would even be spoken to me. The reality was I was simply buying time for her to check my fake news info which would allow me to bail like a teenager stealing beer. After that little episode we decided to move the engagement session to the beach.

After rocking some blue hour photos at Newport Beach, we headed off to a Whole Foods (you read that correctly) for some post-game IPAs. I never drank in a grocery store before but I have to say that the people of Newport Beach seem to have it figured out because a bar in a health food store really was pretty amazing. I don’t really know how to effectively conclude this little engagement photo blog post so I think I will just end it with a good bye. Fin.

Those interested in checking out more beach photography work can check out these engagement photos at Manhattan Beach Pier I photographed late last year! Cheers!