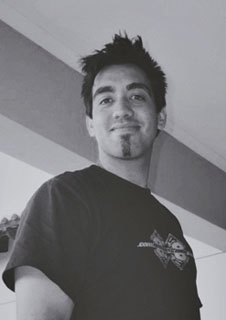 Every so often we experience an event on the most typical of days that completely shocks the monotony and seemingly boring routines of our lives. This disruption interrupts every cell of the body and feels like a cold Winter chill across both the physical body and existential mind. It is a stark reminder that we are no more permanent than the smoke that rises and dissipates into the night.

Everyday most of us wake up, go to work, come home, spend some time with a small circle of family or friends, then repeat this process with relative consistency. We talk about the weather, who is dating who, what we thought about a particular movie or television show and other things that would be classified as small talk. Words to fill time, and keep us occupied. There is absolutely nothing wrong with this process of daily life, but the cycle becomes totally exposed and broken when we hear the words that someone special we knew passed away.

A person who entertained people all over the world.

A person who was a great friend to somebody.

A person who was a brother to somebody.

A person who was a son to somebody.

A person who was the father to a beautiful daughter.

…This person was Travis Hart.

Travis was a very unique individual who possessed many God given talents, and those talents allowed him to travel to locations all over the globe. They allowed him to connect and share experiences with people in Europe, Australia and places all throughout the United States. People from different ethnicities and backgrounds who would all say their lives were a little bit better for knowing him. This is clearly evident by the out-pouring of well wishes and photos being posted on Travis’ Facebook wall from individuals all over the world. However, in no place did he touch more people and cultivate more long-lasting friendships than in Temecula.

Temecula is a small town, and almost anyone between the ages of 26-35 knew who Travis was. More than likely they were lucky enough to share his company, or maybe have a couple beers with him. I was fortunate because I was able to do both on many occasions. One of my favorite and most memorable stories with Travis I will share occurred about 10 years ago when he and I were having some food and drinks in the bar section of a local restaurant off Jefferson Avenue. We were sitting next to each other, and next to me was this guy and his girlfriend. As we were eating, the guy near me began acting like a complete tool toward his girlfriend. After about 10 minutes of the non-sense, Travis clearly had enough. But Travis was never the aggressive type, so when he got up from his seat I really wondered what he was going to do. What he did was grab the ranch dressing he was using for his food, and dump the entire container all over the guy’s head! Everyone was laughing so hard at the jerk that nobody even recognized that Travis literally ran out of the restaurant. My eyes were completely filled with tears of laughter, as it was truly one of the most hysterical, embarrassing and emasculating things I had ever witnessed.

Most everyone in Temecula who knew Travis can recall with vivid detail a story such as this. That is because Travis was one of those very rare individuals who truly lived and seized opportunities in life. Most of us from Temecula never really thought of Travis as the ultra-talented guy who made bikes, snowboards and motorcycles his personal playground, but rather as the funny guy with a slightly goofy voice. The guy that everyone enjoyed being around.

When I close my eyes and think of Travis, the very first thing I hear is that one-in-a-million voice, followed by a chuckle of laughter. That is because he was such a funny guy who could have been as talented in the realm of comedy as riding if he ever chose to peruse that path. Then again, Travis was so talented he could have been successful at whatever he wanted to do. I only wish that he was given more time so we could all witness where that talent would take him next in life.

Please feel free to share any thoughts, stories or comments about Travis.